Tomorrow is December 1st!  We have been planning for Advent for a little while now, to make our own homemade advent calendar.  There are many commercial calendars, some just cheap and some very expensive.  Anyway this one isn’t expensive and it isn’t disposable either, we will use it every year and as Evie gets older I can easily tailor what goes into it.

(picture below by Evie) 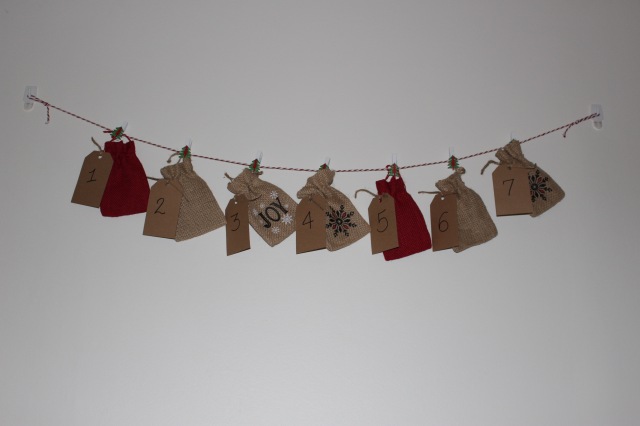 I had planned to get this ready and posted before the last hours before the start of Advent, but there is still time.  The kids won’t care if you are a day or two late, they will be so excited for this.

Also doesn’t have to include treats or presents, but maybe a “fortune” type note, or the name of a book to read.  Whatever works for your family.

FYI- This is not an affiliate post, we just used this stuff because it is what worked for us, we were not compensated in any way. We went to Michael’s, in the area where they have the cheap bins and got the little burlap sacks (2 for $1.50), little decorative clothespins (8/$1.50), tags (16pkg for $1.50), baking twine (large spool for $3), the 3M hooks I had on hand and I just had to buy some replacement adhesives.  The treats/small gifts for the bags I got at a few different places, mostly Bulk Barn since I could buy exactly  the amount I needed.  I won’t say anything else about that part since Evie is helping and she cannot know what her advent treats are.

The tags were blank, we just wrote the numbers in marker.  There were 16 in the package so we wrote on both sides of some.

The twine we put on the wall with the 3M hooks, like a clothesline at child height, and attached the numbered tags to the sacks and then pinned them to the line. 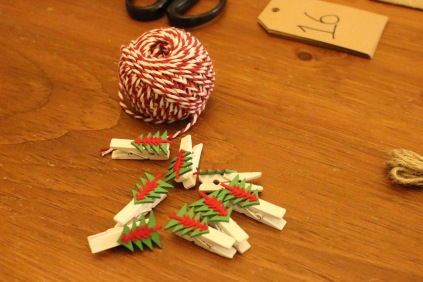 We are doing a week at a time, so there are the first 7 days!  We will just switch out the tags next week.  It really was very simple and it turned out well.   She will be very excited to get up tomorrow to see what is in the first sack.  She also has a little envelope from Mass on Sunday which has actions that she will do for everyday of Advent to remember why we are having Christmas.  That sermon talked about that even though the Grinch stole the feast and all the presents all of the Who’s in Whoville still had Christmas.  I can honestly say that is the first time ever that I have been to a church service involving How the Grinch Stole Christmas, it was very well done.